Do you recognize any of the pilots? 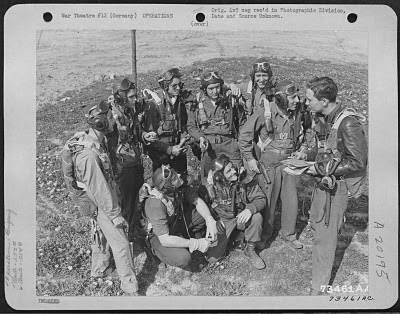 Our friend, Chuck Tighe (of the 355th FS) just sent me an email letting me know that this same photo is included (in color) in Steve Blake's book "The Pioneer Mustangs Group - The 354th Fighter Group in World War II."

In the book the caption lists the men as:

Chuck also believes the men not identified in the book are:

I am going to forward this photo to Ralph Van Cleave's widow. She will be happy to see it!
Posted by Jon Teboe at 11:48 AM

THIS IS SO COOL. MY CUZ. SENT THIS TO ME. KRESS IS MY UNCLE. HE HAS PASS ON NOW. HE WAS ONE OF THE GREATEST PERSON YOU WOULD EVER WANT TO KNOW. HE HAS TO SONS THAT ARE LIKE MY BROTHERS INSTEAD OF CUZ'S. THIS IS REALLY AMAZING. GOD BLESS THEM ALL. DIANE