I just received this French Newspaper article about the recent 70th anniversary of the death of my relative 1st Lt. William R. Perkins, a fighter pilot from Grand Rapids, MI.

It tells about Bill's unfortunate death on June 13, 1944. He was shot down and KIA while on a mission over Northern France.

My thanks to John Torchio, a fellow WWII researcher, for passing on my info and photos for use in the article!

The article mentions our video project and also gives out this blog's web address. 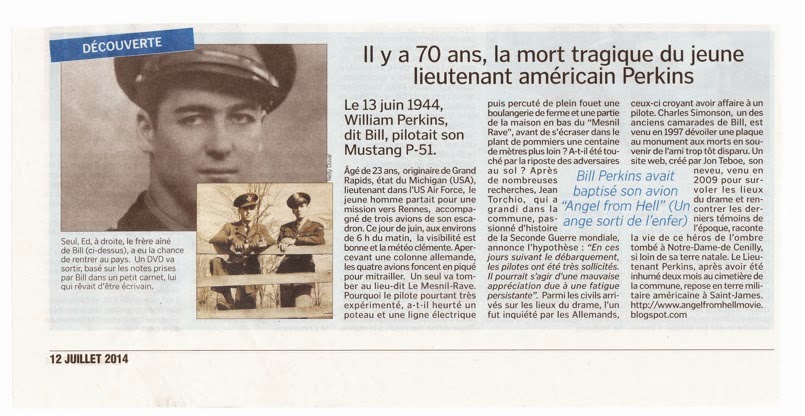 I used GOOGLE TRANSLATE to translate this news article. It may not be the perfect translation, but I believe it is very close: DISCOVERED:Only Ed(on the right), the older brother of Bill (above), had the chance to return home. A DVD will come out, based on notes taken by Bill in a small notebook, who dreamed of being a writer.

70 years ago , the tragic death of young American Lt. Perkins.On 13 June 1944, William Perkins, was flying his P-51 Mustang.Age 23-year-old from Grand Rapids, state of Michigan (USA), a LT. in US Air Force, the young man left for a mission to Rennes, accompanied by three of his planes escapdron.This day of June, around 6 am, the visibility is good and the weather clement.Seeing a German column, the four planes descend to strafe.One will fall at a place called the Mesnil-Rave.Why, a highly experienced pilot, did he crash into the pole and power line and struck head-farm bakery and part of the house down the "Rave Mesnil," before crashing into the plant apple a hundred meters away?Was it a response of enemies on the ground?After many researches John Torchio, who grew up in the town, passionate history of the Second World War, announces the hypothesis ""In these days of the landing, the pilots were very solicited. Could be a bad appreciation due to persistent fatigue"Civilians happen on the scene.Charles Simonson, a former camardes Bill, came in 1997 to unveil a plaque in memory of the dead monumnet the friend gone too soon.A website created by Jon Teboe, his nephew, came in 2009 to fly over the scene and meet the last witnesses of the time, recounts the life of this hero of the shadow falls to Our Damepde Cenilly, so far of his native land.Lt Perkins, after having been interred at the cemetery two months of the commune, based in American military land in St. James
Posted by Jon Teboe at 8:44 AM