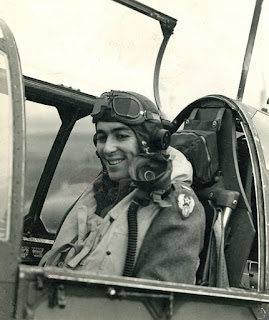 The photo is of William R. Perkins, also known as "Perk."

"Perk" served in the United States' 356th Fighter Squadron (which was a part of the 354th Fighter Group) in World War 2. His P-51 Mustang was named ANGEL FROM HELL. Although against the rules, he kept a very detailed diary from January 1 to June 12, 1944, the last six months of his life as a fighter pilot in World War II.

My mother was married to Gordon Perkins, Bill's older brother. Gordon kept Bill's diary after the war. My mother had told me about it and when I read it, I was inspired to produce a documentary about his life in the war.

If you have any information about William R. Perkins or knew him, please contact Jon Teboe at flashframe1966@gmail.com.
Posted by Jon Teboe at 4:39 PM No comments: