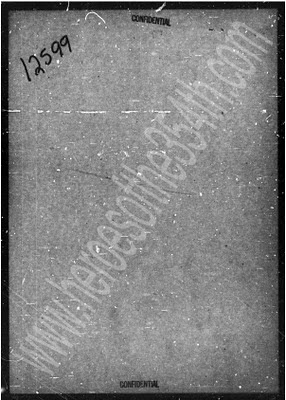 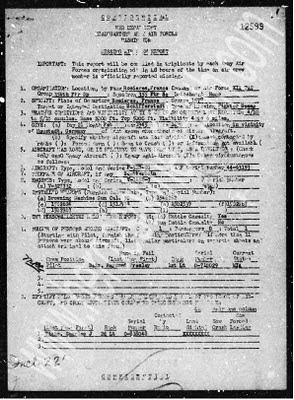 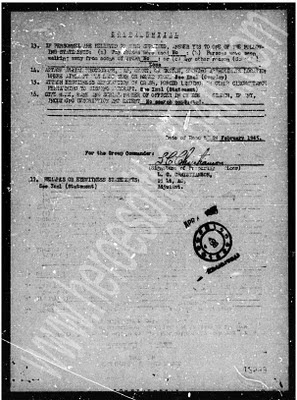 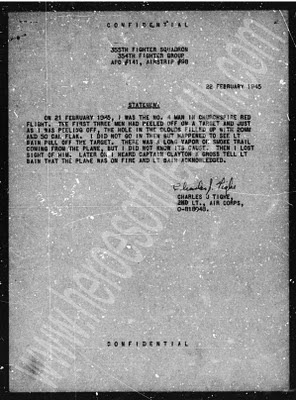 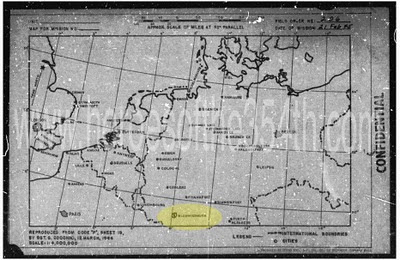 I recently found this set of documents on FOOTNOTE.COM.

This is the Missing Air Crew Report for Ray Bain of the 354th Fighter Group.

Some people have asked about my regular job. This is something I recently edited for the company I have been working for. It is a 9 minute preview of next week's Emmy Award Show.
Posted by Jon Teboe at 10:22 PM No comments: 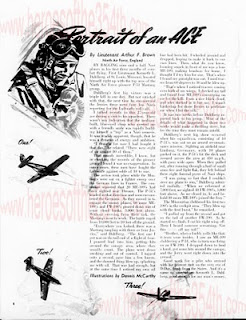 When I first started my research for the WWII documentaries, I bought 3 rolls of microfilms concerning the 354th Fighter Group from the US government for about $300. I then paid a company to scan them to images for me.

Today I found this page from what appears to be a magazine called SKYLINE (dated JANUARY-FEBRUARY, 1945).

The article is called PORTRAIT OF AN ACE and is about Kenneth Dahlberg from the 353rd Fighter Squadron. The author of the article is Lt. Arthur F. Brown.
Posted by Jon Teboe at 2:55 PM No comments: 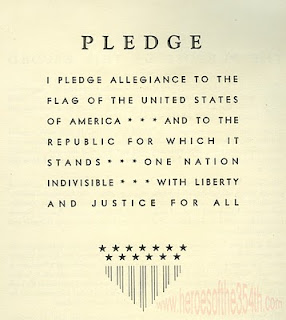 This is a scan of the "American Pledge of Allegiance" from a publication during the WWII era.

Thanks to Joseph Kronek and his daughter for sending it to us awhile back.
Posted by Jon Teboe at 2:51 PM No comments:

Heroes of the 354th - Reunions - reposted

He would have been 90 years old today.

Here is a scan of the letter his grandmother received telling her about the fate of her son. At this point he was still officially considered MIA. It would be several months until she learned that William was killed during this morning mission. 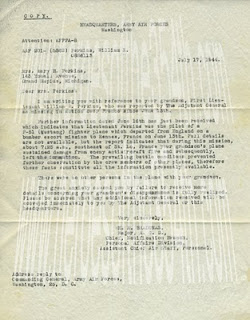 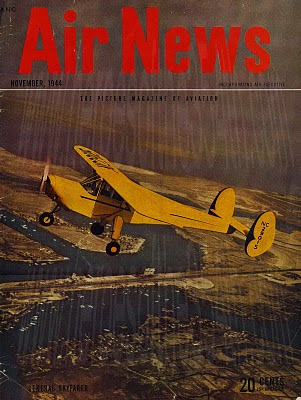 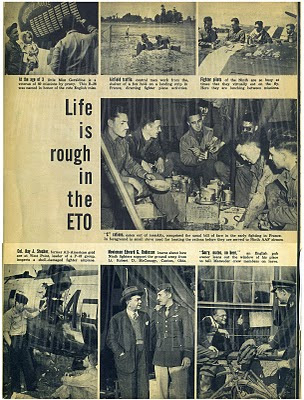 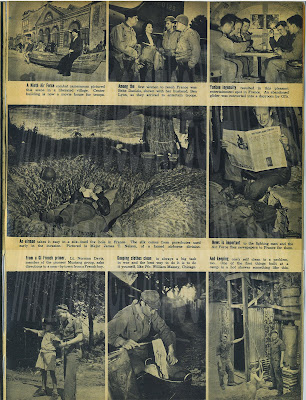 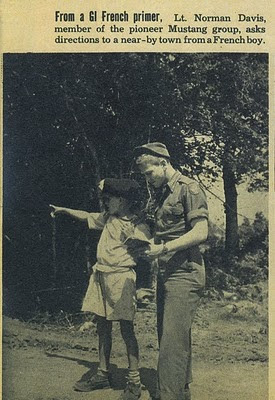 Norman Davis from the 354th FG's 356th FS sent me these scans awhile back. This magazine was from November 1944. It was sent to his wife in late December 1944. Norman told me this photo of him on the second page of the photo spread (a CU is also posted) was taken in Normandy at A-2 in July or August of 1944.
Posted by Jon Teboe at 4:28 PM No comments:

I spoke to a relative of Robert "Pops" Young today. Young's plane WAS named Bo-Yo and it was confirmed that this photo is of the 356th FS and the plane is BO-YO.


(I think there was a plane named YO-YO in another squadron)
Posted by Jon Teboe at 12:14 AM No comments:

356th ac2
Originally uploaded by TwisterDog
According to the TwisterDog account on flickr, these planes are from the 356th FS.

If so check out the plane on the left side and third down. Does it say BO-YO? (or is it YO-YO) any thoughts?

If you click on the photo, it will take you to flickr. Then on top of the photo you can click ALL SIZES and then click the choice of ORIGINAL and that will bring up the highest quality version of the photo.
Posted by Jon Teboe at 5:06 PM No comments:

P-51B Mustang "Miss Pea Ridge"
Originally uploaded by Doug Sheley
This was found on flickr.com - This was from the 356th FS.


If you click on the photo, it will take you to flickr. Then on top of the photo you can click ALL SIZES and then click the choice of ORIGINAL and that will bring up the highest quality version of the photo.
Posted by Jon Teboe at 4:56 PM No comments: 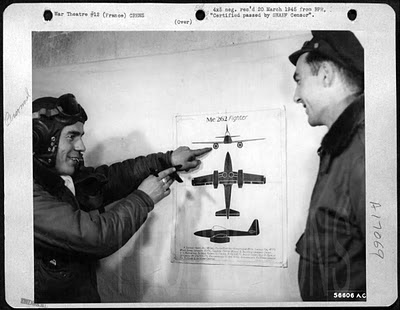 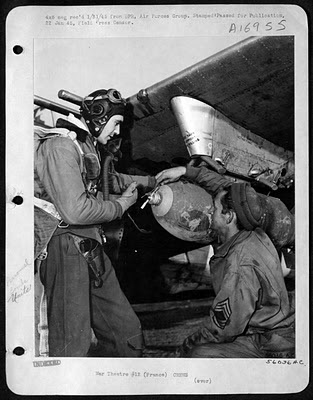 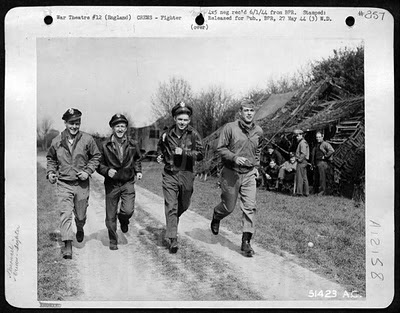 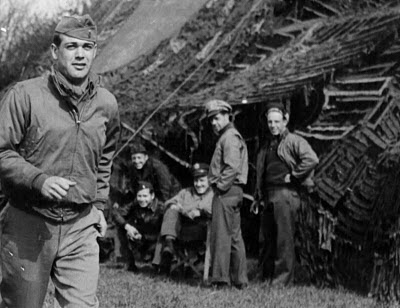 This photo features 4 men from the "9th Air Force." I just found another document on FOOTNOTE that shows 1st Lt. Walter A. McKinney was in the 353rd FS of the 354th FG!

Perhaps these other men were too! Do you recognize any of them?
Posted by Jon Teboe at 10:50 PM 1 comment: 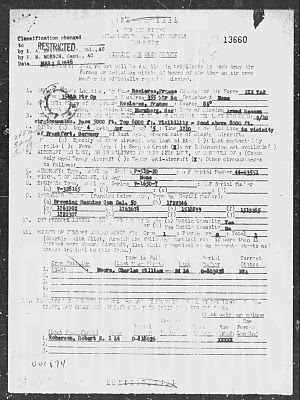 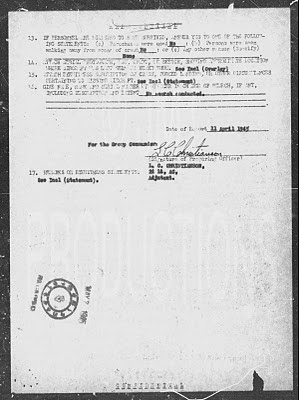 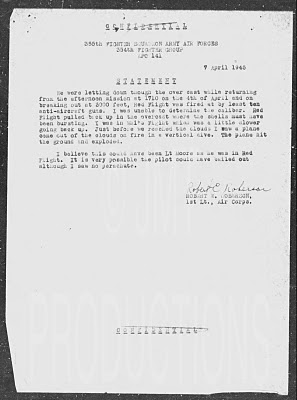 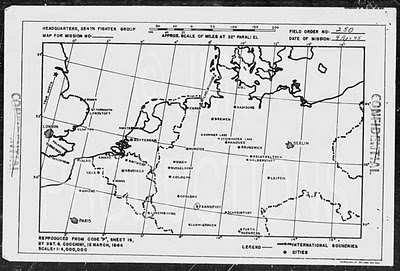 (These two newspaper clipping were previously featured on this blog.) 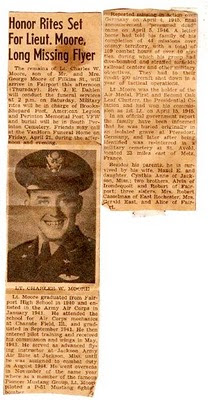 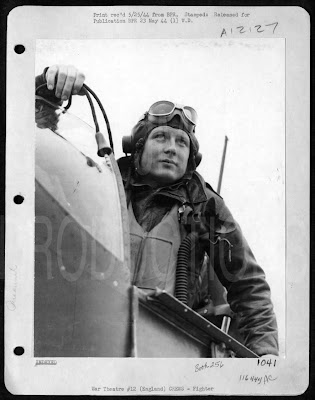 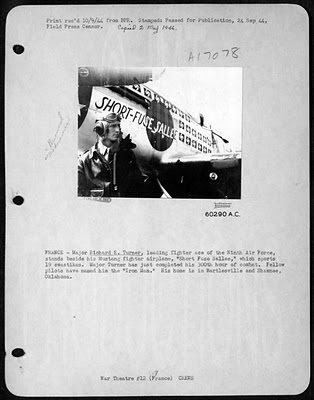 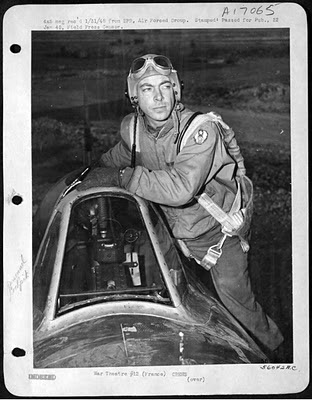 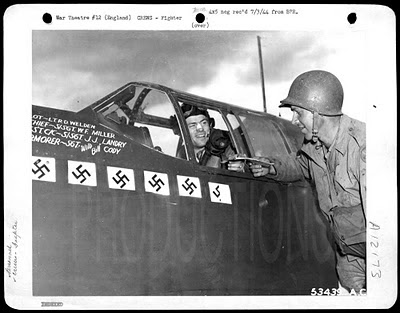 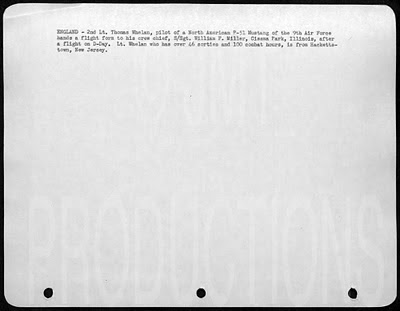 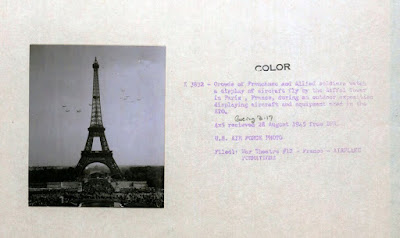 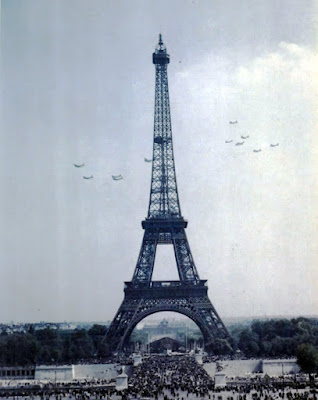