From the Charles Simonson Collection 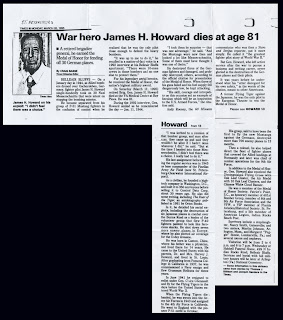 In 2006, we attended our first 354th Fighter Group reunion and visited the base in Portland where the original members of the group were stationed.

I found the picture on the left in my official government documents.

Can you recognize anyone?

In the photo taken in 2006, Hugh Gibson, Bill Davis, John Boydstun and Art Owen (all original members of the 354th) can be seen! 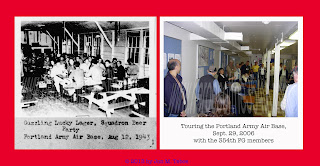 While researching the military career of Captain Alfred B. Styrsky I found these declassified films about a top secret mission he was a part of. In 1951, Styrsky flew missions as part of "Operation Greenhouse.'" He was a shuttle pilot for the scientists.

This is the 22 minute film.

This is the 80 minute film.

Both of these films were found on archive.org.


This one was found on AIRBOYD 's channel on youtube. More info on the atomic bomb tests.

We met him and interviewed him about his time during WWII with the 354th Fighter Group.

(Vintage newspaper headlines and government films provided by the 356th's Pete Wilson help illustrate the arrival of the P-51 to the European Theater of War.)

Captain Alfred B. Styrsky served in the 356th Fighter Squadron of the 354th Fighter Group. This video tribute is based on the article written by Al's children that appears on the www.345thpmfg.com website.


All original music was written by my brother, Rene Michael Teboe.

Thanks to the Styrsky Family for the use of their father's WWII photo and film collection.

Al Styrsky retired from the Air Force as a Captain.

"Operation Greenhouse" was a series of tests. I have posted two declassified films about them.

The dog's name in the video was "Flak." Alfred Strysky told his son that "some people named him "NYB" for "Not Yet Boresighted" due to one of the dog's eyes not tracking the same."

Thanks for the additional information, Al, Jr.!
Posted by Jon Teboe at 11:05 AM 2 comments: