(With Thanksgiving coming up, I thought this would be an important posting.)

At the 2007 Reunion, I met Mark Radojits, who is the son of Tony Radojits, a pilot in the 354th Fighter Group. I had first heard of Tony from Ed Regis. Ed told us that Tony Radojits was also a former POW in Germany's Luft III.

From Mark, I have been able to learn a lot more about Tony and Luft III.

For a while, Tony was listed as MIA and his mother did not know if he was alive. She later received a telegram telling her that Tony was alive and a prisoner of war. It was very good news! 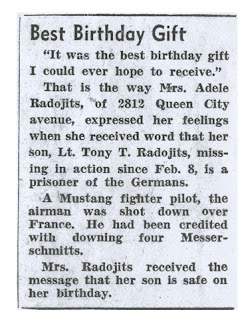