Over the last few weeks I was contacted by email from a son and a son-in-law of one of the men who was in the 354th Fighter Group. 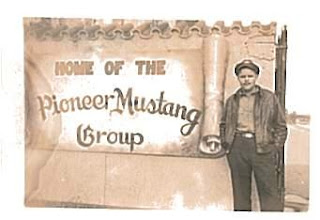 Willie J. Laughridge was in the 356th Fighter Squadron. I had the pleasure of interviewing him by phone today. He told me some great stories about his time in WWII. He is still married to his post war bride!

Some of the men may remember him having a very big mustache back in the war. His nickname was "Lt. Moe Stache", which was painted near the cockpit on his plane.

His plane's name was "Pug Ugly Jim" (seen here in this photo). 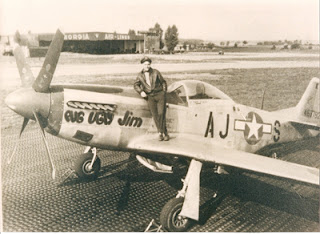 As a joke some of the men painted "Georgia Air - lines" on the hangar in the background!
Posted by Jon Teboe at 10:24 PM