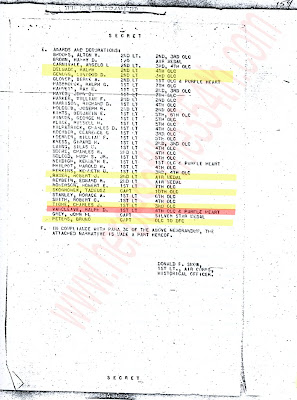 I just found this page from one of the 354th Fighter Group's files given to me by Chuck Tighe.

I have highlighted (in yellow) then men whom we've interviewed. (Ralph Delgado, Linwood Genung, Robert Ramer, Ted Skoronek, Chuck Tighe and Bruno Peters) It was an honor meeting all of them!

I highlighted (in red) a pilot named Ralph Van Cleave. Ralph passed away in 2006. His widow (Virginia) discovered some 16mm film he shot during the war. I am in the process of finding a place to transfer it.

A special thanks to Virginia (for letting me borrow the priceless film) and her friend Peter Iversen who put this all in motion!
Posted by Jon Teboe at 4:31 PM